In their capacity as PSCS for the project, GRSL supplied a secure yard/compound and were responsible for liaison with ESB, Louth County Council and all affected residents and business owners.

Providing a fully managed service including QSE representation for the project duration, the work scope covered the excavation, ducting, backfilling and reinstatement of trenches, including crossing a stream. GRSL also connected two existing ducts that were under the M1 motorway, laid ducts over/under existing services and culverts and installed a 400mm2 XLPE power cable prior to completion of all road and pavement restoration works.

Significant amounts of hand excavation assisted by a vacuum excavator – to help protect existing services – was also undertaken, which were very deep in a number of locations. GRSL were responsible for the design and construction of all temporary works.

The project was a necessity for the town of Drogheda; supporting power capacity upgrades to enable future development.

“Well done to all concerned for a successful project and with special thanks to supply chain partner Córas Pipeline Services Ltd.”

Irish Rail, on behalf of Rosslare Harbour, has awarded Global Rail Services Limited (GRSL) a contract to repair damage to the Berth 3 linkspan, which caters for the Stena Horizon and Europe ships.

The existing damaged structural steel elements are being replaced in a like for like manner. GRSL have been tasked with the fabrication of steel to an Execution level 3 (EXC3) for the linkspan with an estimated overall tonnage of 10 tonnes.

GRSL have provided a bespoke temporary working platform fixed to the underside of the linkspan structure for safe access to the front face of the linkspan, aided by the deployment of an MSO (Marine Survey Office) licenced safety boat with P4 certification and a competent trained skipper. The temporary platform was designed to be submerged into the sea when contract works are not taking place, so that the linkspan can remain operational for ships to use.

The overall project aim is to improve the reliability and performance of the signalling system in the Cambridge interlocking area. As part of the project, the existing assets are to be surveyed and their continued use validated. Geographically the project covers roughly the track on the approaches to a triangle between Cambridge, Ely and Bury St Edmonds.

In summary, GRCL’s survey works include the following items:

Works will be carefully co-ordinated and delivered during Rules of the Route published possessions/line blockages and isolations with safety critical support, during both midweek and weekend days/nights. Additionally, there are a number of longer, disruptive possessions with isolations to be utilised.

There are many risks associated with working on the rail infrastructure. GRCL’s in-house project management team will be responsible for the delivery of this package of works and will seek to carry out a full assessment of the risks in order to feed into the overall design process.

GRCL’s approach is to think about health and safety in terms of buildability, maintainability and usability at all stages of the design process, so it becomes a natural part of the design. At each stage, GRCL’s delivery team will identify and eliminate hazards. They aim to maintain close communication with key project stakeholders, to support the reduction of the risks that may arise during construction work, which will enable the plan to be kept on track without exception.

Following a road traffic collision (RTC) in the early hours of 17/07/2020, where the granite wall of Overbridge 254 was knocked down onto the track below following an impact from a van that struck the wall, Global Rail Services Limited were tasked, by Irish Rail, with removing the debris from the track and repairing the wall.

Global Rail Services’ emergency response unit, swiftly mobilised to site to secure the works area, which was hazardous with a high and open edge over the track, installing traffic management on the road leading to and from the bridge to prevent further incidents.  With close collaboration and following an inspection of the wall with Irish Rail’s Structural Engineer and the Local Authority Engineer, it was decided that the wall would need to be immediately repaired and the road surface would need to be cut and excavated to allow the wall to be reconstructed to its original position.

With the Local Authority Engineer granting an immediate 10-day window for the road to be reduced to one lane, the affected area of track was then closed off and removed from use, to prevent trains from entering where loose masonry had the potential to fall and strike a train.

Global Rail Services engaged their established supply chain partner – stonemason Rock Road Stone Company Ltd –  to strip down and rebuild the lime mortar granite wall.  A Global Rail Services civils team and a responsible Project Manager were also mobilised to both carry out the excavation and assist with the safe execution, co-ordination and management of the works.  The works could only be carried out under TIII absolute possession, the hours of possession were 8pm to 5am.

Despite being given a 10 day window, the team rebuilt the wall over the course of 3 nights and then completed the painting, chevron sign installation and road reinstatement over the following 4 days by the 23/07/2020, thereby completing the works 4 days ahead of schedule.

Irish Rail’s Regional Manager for the area commented about his satisfaction with the completed works, saying: “we should have asked you to repair the rest of the wall, because the repaired wall looks better than the rest of it”. This demonstrates the quality of the work carried out by the entire Global Rail Services team.

Global Rail Services Limited (GRSL) are pleased to confirm that the first passengers were able to use the newly constructed Linkspan Bridge on 3rd July 2020, just 4 weeks after it was taken out of commission, following the successful completion of their contract for the complex replacement of the Berth 1 Linkspan upper deck transition ramp for Irish Rail. Although the works are contracted by Irish Rail, because the location was inside Rosslare Harbour, GRSL were working under the daily jurisdiction of Rosslare Europort.

The works to the upper tier, which were conducted to a demanding berthing schedule, where the lower tier had to remain operational, to enable ferries to operate normally. Activities were planned around a live working International Ship and Port Facility (ISPS), and specifically comprised the removal of the existing and installation of a new transition ramp at Berth 1, on the Upper Tiered Linkspan, to accommodate the new WB Yeats Ferry.

GRSL’s contract, which commenced on 4th June 2020, provided for the following civil works:

Following completion of this contract, GRSL have increased the previous linkspan by 1.6m and in doing so, installed nearly 40 tonnes of heavy structural steel section to an Execution Level of 3 (EXC3) standard.

During the project a number of challenges were encountered and expertly met by GRSL’s team of structural, civil and project managers, whilst still maintaining program, these included:

“This complex, fast-track project has been successfully completed within the allocated shut down. We have worked closely with our sub-contractor JA Engineering, Irish Rail & Rosslare Harbour to deliver these works.

“Despite the unforeseen challenges faced, particularly in the current climate, the works have been completed to the delight of the customer – Irish Rail – and the end user Rosslare Europort. I take my hat off to all those involved in successfully executing a very bespoke project.” 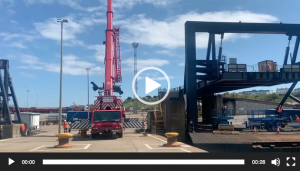 Global Rail Construction Limited (GRCL) has been awarded a contract to deliver the Ely to Peterborough Design for both E&P and Civils (GRIP 4) on behalf of our client Atkins Global. The Civils design covers the review of GRIP 3 designs, surveys and Form 001. E&P Design includes surveys, load monitoring and cable calculations, Form A’s for several Level Crossings and power supply schematics.

The Ely to Peterborough scheme is aimed at increasing safety at a number of Level Crossings and increasing the remaining life of the Signalling assets in a number of interlocking areas.

Having a multi-disciplinary workforce including design, civil and structural engineering and E&P expertise, along with in-house project management and having previously delivered time-pressurised, highly co-ordinated schemes, allowed Global Rail Construction Limited to provide the necessary solution in order to complete the works to meet the client’s requirements.

Global Rail Australia has undertaken a project to remove and replace worn rail on curves on ballasted track at Queensway St Kilda and we are pleased to confirm that all works have been successfully accomplished within the rail occupation, provided by Yarra Trams, with no technical issues. The project was complicated by remote working; however, this was managed through a meticulously safe approach and a management presence throughout the works.

Works included rerailing both the Up Track and Down track curves, which covered the following managed scope:

All works were completed utilising in-house resources, supervision and plant over a single weekend and supported by a staging program and procurement plan, which were key to the success of the project. We are pleased to say that no reports or incidents were raised by the public or client.

Global Rail Australia has successfully completed a project for Australian Rail Track Corporation for the removal of mud from steel culverts and providing a new bottom concrete layer using the shotcrete process.

The scope covered culvert lining for 24 culverts at 7 different locations in the Geelong and Ararat regions of Victoria. The following activities were undertaken by Global Rail Australia in a live operational railway environment:

All activities were fully coordinated with the client and delivered on time and to budget, aided by a fully sequenced, detailed program and Global Rail’s supervisory team. We are delighted to say that the works were completed to meet the client’s satisfaction.

Global Rail Construction Limited has secured a Points Heating remedial contract with BAM on the Thameslink Project. The E&P design and build package of works, forms part of a requirement to upgrade and rectify the railway systems infrastructure to support the capacity improvements recently made in the London Bridge area.

The 26-week programme, includes an 8-week procurement period in order to secure all necessary RCM equipment and parts for the project and covers the following activities:

The 6-week design and survey period commenced this month, with the remainder of the contract works being completed by late September 2020. Installation works will be undertaken during a standard 5-day working week and activities will be worked concurrently in order to meet the required project milestones.

Mechanical & electrical services provided by Global Rail Construction are constantly upgraded through training and development and are consistently delivered to the highest specification.

GRA Networks has been awarded a framework agreement with Ericsson to install 5G Technology on both Optus and Telstra Networks, including the upgrade of existing communication towers to support the new 5G technology.

GRA Networks are delighted to be delivering this framework for Ericsson as an approved supplier and look forward to being able to develop this relationship over the next few years.